The rain is easing off, spring has arrived, the sun is shining – time at last to get the Lamborghini out. Not to zoom over the tarmac, but to mow the grass or cut down those thick branches. Because these Lamborghinis from the Ore Mountains are (in every sense) something else: MOGATEC Moderne Gartentechnik GmbH in Drebach produces garden tools for well-known brands, making it one of the largest manufacturers of garden equipment in Europe.

Drebach, 17 May 2016. Right now, as spring blossoms, garden tools are out in force. Here and there the happy owners of a garden or a plot of land will be reaching for their “Tonino Lamborghini”. Not many of them realise that they are holding a product from Drebach in the Ore Mountains. “We acquired the gardening brand rights for ‘Tonino Lamborghini’ a while back. It’s the same brand as the prestigious carmaker,” explains Tobias Wetzel, Managing Director of MOGATEC Moderne Gartentechnik GmbH. But it isn’t only Lamborghinis that are produced in the Erzgebirge; well-known horticultural and forestry brands and big German do-it-yourself chains come to the local company for their products. “That makes as one of the few manufacturers of garden equipment in Europe,” boasts Alexander Gränitz, the company’s other Managing Director. 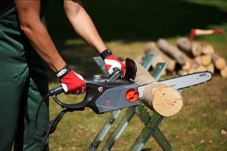 MOGATEC primarily specialises in electrical garden tools like hedge trimmers and chain saws, and the quality of its products is widely appreciated. “To achieve that, we work non-stop to build on the high standards we already have, and we are continuously developing our products,” says engineer Tobias Wetzel, adding: “We are trailblazers in our sector, especially for power and safety technology. We have numerous proprietary features under our belt, like the fast-stop mechanisms.” To this end, the company works closely together with customers. “Depending on the project, there is a dynamic exchange between our clients’ developers and our own engineers,” comments Wetzel. The team in Drebach have managed, for example, to devise one of the lightest and yet most robust hedge trimmers in the world. “Making light of heavy work,” chuckles Alexander Gränitz. But MOGATEC is also a market leader in product aesthetics. The firm won the coveted Red Dot Design Award for a battery-driven hedge trimmer. “One of our customers – a garden tool brand of global repute – was so delighted by that hedge trimmer that he promptly decided to integrate the product completely into his own range. Now we produce it exclusively for him,” beams Gränitz.

Our firm in the Ore Mountains has a reputation in the sector for development, quality and technical innovation. Some of the components made by MOGATEC are so outstanding that major companies – even ones that normally do everything in-house – resort to products from the Erzgebirge for parts of their own equipment. So MOGATEC is positioned not only as a garden toolmaker in its own right, but also as an original equipment manufacturer, enabling it to tap into additional market potential.

In the last financial year, MOGATEC posted one of its best results and increased its headcount to well over 200. “The foundation stone for this success was laid by the forward-looking measures taken in previous years,” report Gränitz and Wetzel, the duo who have been steering the company’s progress since 2014 and 2012. In fact, the firm’s eventful history dates back to 1945, when ‘Mechanische Werkstätten GmbH: Metal and Wood Processing, Venusberg’ was founded on the Venusberg nearby. In 1948, it began selling a switchable, double-threaded hand drill, and from 1951 it began focusing entirely on hand tools. Two years later, it was the only company in the German Democratic Republic making hand drills and grinders. After unification, the state-owned enterprise was taken over by the Treuhand and named ‘Venusberg Werkzeuge GmbH’, which laid the basis for the foundation in 1992 of ‘MOGATEC GmbH & Co’ in Ehrenfriedersdorf. MOGATEC began life with 15 employees. 24 years later, after relocating various production units and ultimately siting the company’s present headquarters in Griessbach, a community within Drebach, the headcount has multiplied more than thirteen times over. “We will be celebrating that in 2017, when we mark our 25th anniversary. The preparations are already underway,” reveals Gränitz.

Regional focus, global networking and an instinct for people as the keys to success

According to both its managing directors, one key to the success of MOGATEC Moderne Gartentechnik GmbH has been its focus on the region. “We work closely with firms in the Ore Mountains and Chemnitz,” says Tobias Wetzel, explaining the MOGATEC approach. “It keeps the company flexible, because by using local suppliers we get fast response times.” The two managers also value other local companies for their reliability and because they are sensitive to MOGATEC’s needs. “Sometimes partnerships with regional companies emerge from this that go well beyond day-to-day business,” Alexander Gränitz reports. His colleague Tobias Wetzel expands: “For example, we organise sporting events together, with MOGATEC teams playing teams from our partners.”

These sporting activities do not just improve cooperation between the companies; they are also an element in motivating employees. “We attach a lot of importance to steadily improving conditions for our staff, and that includes attractive opportunities outside of work,” observes Wetzel. That is why MOGATEC offers its workers free tickets for football matches when FC Erzgebirge Aue or clubs in Chemnitz are playing, apart from enhancing workplace conditions or providing recreation spaces indoors and outdoors. There is also funding for further training, opportunities for career development, and a bonus scheme for good performance. There are culinary options too: a salad bar, a cake buffet and free drinks. “As a company, we feel a responsibility for our employees and for the region. We support sponsored runs, for example, and we ourselves sponsor regional events,” adds Gränitz. 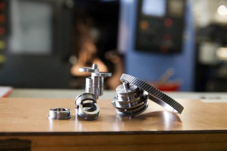 Despite the regional focus, MOGATEC is embedded within an international network. “We may be based in the Erzgebirge, but as a company we need to assert our position on the global stage,” Alexander Gränitz points out. “We have close ties all over the world. Our products can be found on almost every continent.” That means the two managers keep a regular eye on the international market. “If the UK is talking about Brexit, the customs tariffs that will lead to will have a direct influence on our market position there. If the euro is down, that affects our Asian imports and exports.” For the staff, too, the diversity of international relations at MOGATEC poses a particular challenge. “It can happen that someone doesn’t come into the office until the afternoon, and answers the phone with a ‘Good Morning’, because he’s doing a video conference with the United States,” smiles Tobias Wetzel. Wetzel himself prefers the regional form of greeting: “Glück auf!” After all, “we are proud of what our employees here in the Ore Mountains achieve every day, and of the way MOGATEC has been able to grow in this region.”

Regionalmanagement Erzgebirge is a service provider and consultancy which also prides itself in launching ideas and acting as a promoter for the region. The project “Erzgebirge 2020” aims, through active marketing of the region and the location, to enhance the visibility of the Ore Mountains as a good manufacturing base and a great place to live in Germany.